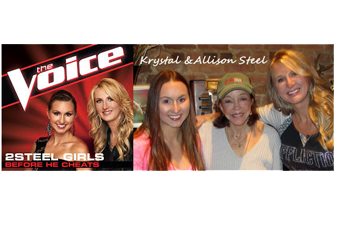 If you are not willing to promote yourself, to put yourself out there why would you expect someone else to promote you like friends, family and fans? Singers must consider themselves like a product and must be the advertising manager for said product.

Talent contests are a great way to promote yourself to the public. You can post on Facebook, Twitter, Instagram and Snapchat all day long and never get the exposure that one talent show could give you.

The 2SteelGirls spoke at my last Master Class titled “Shameless Self Promotion.” They had just made it to the 3rd and unfortunately their final round of The Voice. Instead of giving up, they realized this was actually their launching point for their careers. Since then, they have appeared on “The Kathy Lee and Hoda Show,” received over a million views on many of their videos, have received several sponsorship deals, have a great tour manager and now touring! With no help other than their increased fan base, they have done all their own promoting!

I believe 100% in what the entertainment industry calls “shameless self promotion.” In my career as a vocal coach I’m done more than my share of shameless self promotion and it’s paid off. I’ve appeared on all the major networks and numerous others. I’ve appeared in over 15 major magazines and news publications. Several of these interviews have been to get my take about contests and contestants.

I want you to have all the information you need to help you to feel comfortable auditioning and promoting yourself so I’ve put three links below to articles I’ve written that will help you gain the confidence you need to go out there and be “shameless self promoters.”

Even if you’re still not ready to begin promoting yourself I hope you will take advantage of these articles to help you move forward in your promotional comfort zone.

Audition Anxiety: Are Nerves Getting The Best Of You?

Singer’s Auditions What Do They Really Mean?