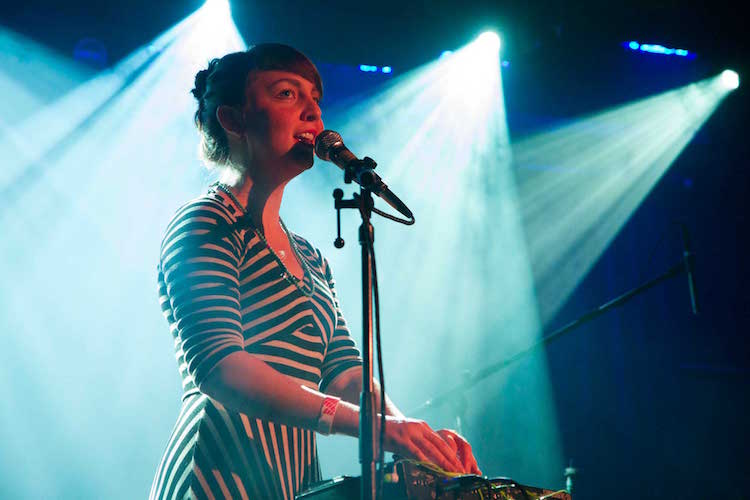 flypaper.soundfly.com This article originally appeared on Soundfly
Whether we’re firing up the van for a coast-to-coast tour or showing up for our first open mic, we as performing musicians must hold ourselves to professional standards. Of course, we will still maintain our DIY-punk aesthetic onstage and in our day-to-day lives. But when it comes to our bands, we take things seriously and work to build a positive, professional reputation. So with that in mind, here are a few tips to live by when you’re trying to get yourself booked.

1. Stay active on the scene, but don’t overbook your bandWhat most folks don’t realize when moving to a big city to pursue music is that being a performing musician is almost as much, if not more so, a social and entrepreneurial practice as it is an artistic one. It goes without saying that your sound is what makes you stand out, but you still need to be a person the second your set is over.

We’re not rockstars here, so get to know the people you share the bills with; find a community of like-minded people who share your values as both artists and people. Don’t just friend them on Facebook – actually stick around after your set and watch the other bands play.And while it’s clearly beneficial to perform and meet other bands, don’t book your indie-rock band three nights a week when you can only guarantee a 15-person turnout at most. You’re going to wind up dividing that into three groups of five. Not only will your reputation suffer because you made the venue no money, but playing for nobody feels awful. We’ve all been there, but paying attention to spacing out your booking can seriously help prevent empty rooms.

2. Provide for all of your own technical needsThis not only applies to the obvious – keyboardists, DJs, and live electronic musicians – but also for good, old-fashioned punk-rock bands, too. First, check the backline of the venue you’re playing. If it doesn’t say that snare drum and hardware are provided, you better bring your own. Are you gonna need a bunch of super-long cables so you can run around on and off the stage without getting unplugged? You better bring your own. Does the house turntable setup look like it hasn’t been touched in decades? Bring your own. Don’t complain; you haven’t lived until you and your mates have carried your entire setup on a round-trip subway ride to the club and back. It’s exhilarating!

3. Soundcheck!Why do artists think that showing up to the show late looks cool? Why do those same people complain that the sound engineer isn’t taking them seriously when they do arrive? Why do they then complain about how poor the sound was after their set wraps up?
​
It’s crazy to me, as both a performer and engineer, why someone would choose not to soundcheck when they have the opportunity. Every venue is different, and soundchecking is the only way to explore how your music sounds in a particular live setting. It’s common sense! And despite the inconvenience of sometimes having to show up to a venue at 6:30 p.m., 9 times out of 10, the improvement in quality to your sound and show, compared to not having soundchecked, is well worth the time (and the blow to your normal fashionably late image)!4. Diversify your sound, diversify your billsAll too often do we see these monolithic bills in the DIY “rock” world. After I’ve listened to three, all-male, college-aged, indie rock quartets in a row, I’m going to be a lot less inclined to want to listen to a fourth just out of sheer boredom.

If your sound expands beyond a single categorization and appeals to more than a single demographic, you’re much more likely to appear on more eclectic bills. Of course, there are exceptions to this rule. It’s reasonable that you wouldn’t want your pop singer-songwriter project to appear on an otherwise harsh noise bill. But the majority of aspiring “rock” and “pop” musicians out there can benefit greatly from making that extra effort to sound just slightly different than those other guys. And it will pay off in the performance setting. And you’ll build a bigger audience faster by playing to different, more diverse audiences than you were reaching before.

5. Play tons of college showsLots of young musicians don’t realize this, but most colleges have funding for campus events paid for by a small percentage of the student body’s tuition. These colleges have to spend this money on events programming annually, and often the students themselves get to select the acts.

If you have a car and friends at school, hit them up and hit the road. With enough students requesting you play their school, you can get booked with a guaranteed pay. I know that to young artists living in cities, the idea of signing a contract and being paid a guaranteed amount is almost unheard of, but it’s how student organizations book their shows on campus! Not only is there a good take, but you might often be the only show on campus that night.

Compare that with fighting for attention in the big city! Campus organizations and students show great support and appreciation for the artists willing to schlep up to their school. Heck, they might be in for a pleasant surprise, and you might have just found yourself some new die-hard fans.

Max Alper is a musician, sound artist, and educator living in Brooklyn. He performs under his own name and with experimental R&B trio, The Pluto Moons. He currently serves as adjunct faculty at the Manhattan Community College, and is the founder of Sonic Arts For All!, a nonprofit startup whose mission is to bring music technology education to underserved communities throughout New York City.