LEARN HOW TO SING T AND D

LEARN HOW TO SING T AND D 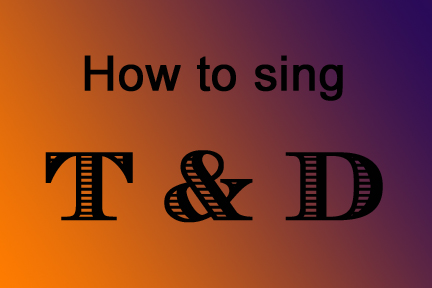 How can a singer learn to pronounce T’s and D’s without sounding like a snob? You may have never thought this would concern you. But there it is — something else for a singer to worry about! As if it wasn’t challenge enough to learn to make those perfect vowels your voice teacher has been struggling to drill into you. Now you’ve got to look into your T’s and D’s too?

This is one aspect of voice training where priorities differ among the many vocal techniques I have studied. Most of the vocal techniques I’ve encountered are “vowel-centric.” Singing instructors tend to concentrate on teaching perfect vowel sounds — often to the exclusion of the consonants.

Now, we do need the vowels to carry the tone but they tend to get a disproportionate share of the attention. One of my many former vocal coaches put it this way, “Serve up your vowels on a silver platter and simply try to get through those pesky consonants until the next vowel comes along and you can once again open up ‘The Voice’.

I’m sorry to disagree, but if people didn’t care about understanding the words they wouldn’t listen to songs!

Funny thing is, whenever I’ve encouraged my voice students to simply enunciate more clearly, almost without exception, they target the letters T and D to exaggerate but continue to ignore the rest of the consonants. This, as you might imagine, makes the singing sound very contrived — like a faked British accent.

Our crazy mixed-up American English makes it difficult to establish rules, especially when you take regional differences into consideration. Therefore I’ve made up some of my own guidelines so we can at least talk about them. But I cannot guarantee these recommendations I am going to make will absolutely fit every person, every situation, and every region. Keep an open mind and actually speak the examples aloud.

“Aspirated” T is a hissy sound made with a little puff of air at the front of the teeth.

“Stopped” T sounds much like the letter D. Lightly press your tongue against the ridges above and behind your front teeth and hold briefly. It is the release that gives the letters their slight “pop.”

Use it:
1)  When T is followed by a vowel. “I can not see.”
2)  When there are two Ts together. “I won’t tell.”
An aspirated T in the last two examples would sound contrived to American ears.

D is also a “stopped” consonant like the “stopped” T described above. Its emphasis is determined by the length of time you maintain the hold with your tongue.

When you sing, your goal should be to make the words sound conversational. This means a good mix of vowels and consonants. The T and D sounds are the trickiest to generalize. Whatever you do, use caution to keep them sounding natural. These examples don’t cover all the many ways to approach T and D in a lyric, but they are at least a start.

We love comments so please let us know what you think of this article.