“YOUR SONGS DON’T ALL SOUND THE SAME, SO WHY DO THEY LOOK THE SAME ON STAGE?”

“YOUR SONGS DON’T ALL SOUND THE SAME, SO WHY DO THEY LOOK THE SAME ON STAGE?” 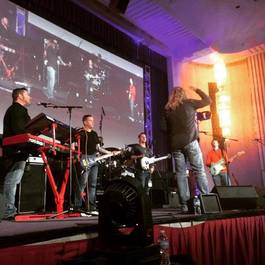 Over the course of 1.5 hours, Tom helped the band transform one of their live songs from an energetic rundown into a dynamic interaction with the audience.

The New York Rock started the session by playing their song, and they really brought some energy. Most people in the crowd were probably saying, “That’s pretty good. Where can it go from here?”

By the end of the session the difference was clear, and many of us were blown away by the following principles Tom applied to the performance makeover, concepts which are applicable no matter what genre of music you create:

1. Remember that audiences aren’t there to hear songs, they want to experience momentsThey want to have their lives changed. They want to make a connection with the artist. If they just wanted to hear the songs and sing along, they could’ve stayed home and opened up Spotify.
​
2. You must direct the focus of the audience

There’s a lot going on: loud music, bright lights, bouncing bodies, the drinks in our hands, the phones in our pockets. We need you to SHOW us where to look.

When The New York Rock got to the guitar solo the first time they ran through their song, I couldn’t tell who was soloing. It took me a few seconds. The lead player stood very still on stage. The rhythm player was hopping around. That created some energy, but really ended up distracting from the lead guitarist’s moment to shine.

This was the first thing Tom worked on, getting the rest of the players to move back while the lead player stepped forward and used the placement and movement of his body on stage to direct our attention.
The less work we have to do as an audience deciphering what’s visually important, the more we can get lost in the moment.

3. Your adrenaline and ego color your perception of what’s happeningYou’re excited and nervous and really invested in this show — so your experience is heightened too. You think you just did a rock leap 5-feet off the ground. What the audience saw was a tentative bunny hop. You think the audience is held captive by your intensely intimate vocals. The crowd was actually being polite, waiting for the slow song to end so they can check their phones and talk to their neighbor without seeming rude.

So… remember this when you’re crafting your performance, and use Tom Jackson’s other tips to bring reality closer to the drama in your mind.

4. Not everyone in the room is a musicianDon’t expect the crowd to be wowed (only) by your crazy syncopated rhythms or harmonic minor guitar solo. Your stage banter, your clothes, your movements, your attitude, your hair, your props — they can all be just as important as the music to your audience’s overall experience.

5. Each of your songs should look and feel differentYou don’t want your show to be homogeneous. A concert is a story, not a quart of milk. Peaks and valleys, sadness and humor, depth and levity, fast and slow: bring the contrasts, modulate the energy in the room, and really take the audience on a visual, sonic, and emotional journey.

6. You have to practice your performance, not just your songsIf you’re “winging it” on stage, the best you can hope for is a GOOD show. So don’t leave things up to chance. When you’re truly prepared, then you can have the freedom to be truly spontaneous.

7. Don’t be loyal to the studio arrangements of your songs. A concert is a different experience than an album, so feel free to explore those differences in your song arrangements.

Should their be a longer intro to allow for some breathing room in the set? Should you extend the solos, or let a few of the players trade solos to increase the energy? Should you vamp on that section after the bridge so you can talk to your fans for a bit? Should you strip the arrangement down, or have the players enter one at a time to heighten the anticipation?

Those are just some of the things you can try throughout your concert to add variety, and to control the energy of the crowd.

8. Use the space you’re given on stageAs I’ve already said above, Tom is big on using movement as a way of focusing attention and building visual energy. If you have room to move, figure out how and when to use the space for the best effect.

If you don’t have room to move (let’s say you’re a pianist stuck in the corner of a crowded restaurant), think of some other gestures or movements you can employ from where you sit.